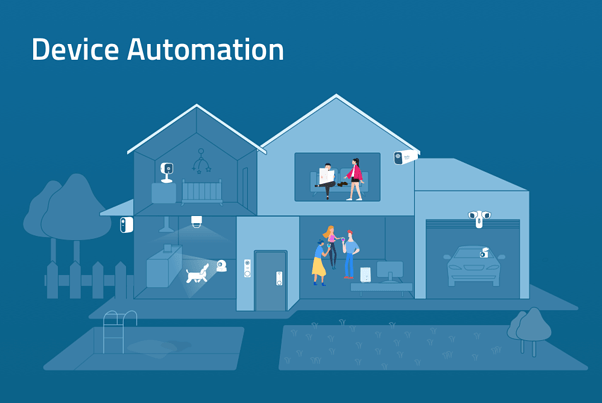 Do you ever feel that you’re getting out-smarted by your smart home? Keep an eye out for more “Unlock the power of eufy” posts and gain the knowledge needed to be top of the smart-home class.

It’s not as complicated as it sounds. Ecosystem automation is simply the way in which different eufy Security devices interact with one another when synced with HomeBase.

For example, you can set your eufyCam to start recording when the motion sensor is triggered. Creating an “automation” such as this not only makes things more convenient but it also can give you more comprehensive coverage of your home.

What is Device Automation

We define Device automation as the creation of customized Triggers AND Actions that take place between connected devices in your security ecosystem.

To create an automation, simply open the app, go to settings, and add Automation group.

How and When Should It Be Used

is a big eufy Security fan! He has a eufyCam 2 system, a motion sensor, and an entry sensor.
He loves the fact that he can create automations between his security products so that work in tandem with each other.

Let’s take a look at some of the scenarios where Tom can use automations to improve his home security:

An intruder breaks into Tom’s house and is able to avoid eufyCam’s detection zone. The intruder triggers the entry sensor as he breaks the window.

Tom has set an automation so that when his entry sensor is triggered his eufyCam will start recording.

grabs Tom’s TV and jumps back out the window. Given that Tom’s eufyCam started recording immediately after the sensor was triggered, he was able to capture the intruder leaving.

2 of Tom’s eufyCam’s are set up within his home. He has one positioned in his corridor and one set up in his living room.

He has created an automation between these 2 cameras so that when the one in his corridor is triggered the one in the living room will immediately start recording.

This came in handy while Tom was on holiday.

After spending the day relaxing on the beach he came back to find a eufySecurity notification on his phone. Given that his cameras were synced up he was able to see the full event right away.

To Tom’s surprise, it was his mother who had stopped by to “borrow” his PS4 while he was away. Apparently all of her friends had just got “Warzone”.

After being so impressed by the effectiveness of the device automations he’d set, Tom decided to test out “Total Automation”. By doing so, all of his security devices became synced so that when any of them was triggered they all would become active.

Tom feels more secure and confident in his home security than ever before.

Currently Automation only supports devices connected to the same Homebase.

The list below displays the Triggers which can be set to each device: 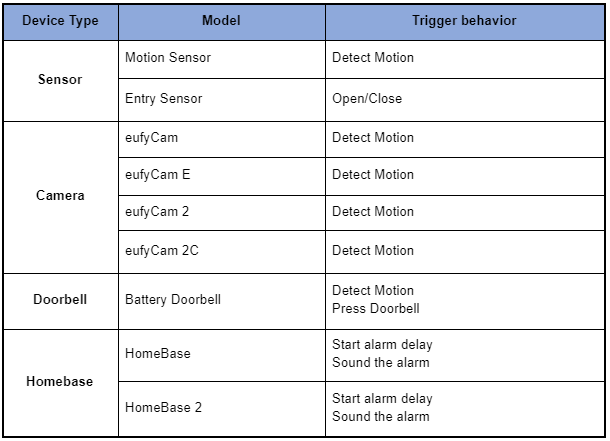 The list below displays the Actions which can be set to each device: 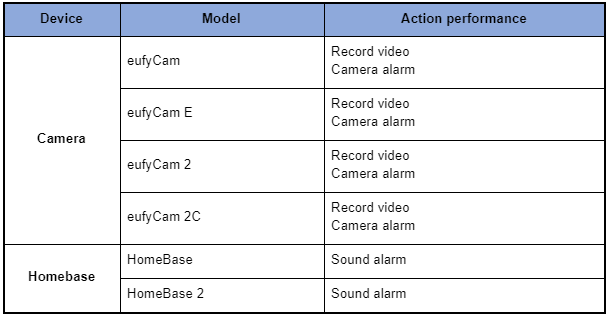 IndoorCam / Floodlight / Wired doorbell / Smartlock are not supported because they do not need to connect to the Homebase.

You are now an automation expert!

Be sure to use this information to make the most out of your eufy Security ecosystem and to have your devices work in tandem with each other.

Where you can find us

If you encounter any problems during use or have any other questions, please contact our customer service team through the following channels:

2）Ask your questions here at the bottom of this post；

3）Send us an email: support@eufylife.com.

We will get back to you as soon as possible.

Thank you for your support.

Great little tips to set up. Will have to get some sensors soon,

Thanks for the tips! IFTTT support would be better though!

This kind of integration across the Eufy range should be a given but how do I get it to make all my Hue lights flash red and blue and make my google speakers sound an alarm noise at full volume?

If would be great if the ecosystem was more consistent. It’s very confusing that not all products support homekit, geofencing, etc.

Why wouldn’t the wired doorbell and floodlight cam be in this list? Why is geofence limited to my floodlight and not the indoor cam?

Why can’t your engineers make it work with smart things or IFTTT? It has been very very clear that your customers have been wanting this. If you want people to buy and refer Eufy why not give them literally the number one requested add on?

Multi homebase support for automations would be good

We want IFTTT automation too. We have Hue motion sensors, smart light including Eufy, smart plugs and lots of other things we want to use in automation.

I’ve been asking for this since the Kickstarter. Very happy to finally see this implemented. Though I can’t find it anywhere in the app

@MindChamber It’s under Security on the bottom, then the automation tab at the top

Many people already have a household filled with a variety of smart devices from different manufacturers. Most of those devices already work well together via IFTTT. I bought all my eufy cameras with the expectation that IFTTT support was coming. After all, it was advertised, marketed and promised. You can’t expect everyone to abandon the investment in their current hardware to join an entirely new ecosystem that isolates itself from the IOT.

I set up automation among my cameras and it works other than I am having cameras recording from triggers but the camera that is triggering the event not recording. Best guess from the videos on the triggered cameras is that the camera causing the trigger is identifying the event as not something it should record (as it is set to record people but is seeing trees move) and filtering it out but still triggering the other cameras to record. Possible bug in the order of kicking off events?

Agreed. And why can’t my wired doorbell and floodlight be added to the Homebase? That seems like the most intuitive thing to do and yet isn’t an option

We are already in the process of developing this part of device, and will meet you after everything is ready. You can continue to pay attention to the notice on our official website.

With the limitation we are finding in the homebase2’s ability to handle more than 3-4 devices at a time, the ability to automate between 2-3 homebases would seem a given.

In our case, we had to stagger devices that are physically close to each other between 2 homebases to be able to get semi-regular recording. Now, they won’t automate together as a result.

Will this be implemented in the near future?