Has anyone received any feedback from Eufy regarding the serious issue raised in the, now locked thread, entitled ‘Stolen Devices Policy’? I find it insane that all data can be so easily removed from the Homebase, directly from the camera itself, by any would be thieves.

Other than the comments within that thread I cannot find any reference to this anywhere else. Please tell me Eufy is addressing this issue…

I hope there addressing it also, major flaw, as I said in other comments eufycam has small to major flaws, but this one is beyond ridiculous, I’d imagine they could fix this issue with an update through the app, this needs to be brought to there attention and fast, by reading the comments here and online, 50 percent of people are saying there going to get different cameras and not invest in eufycam anymore, there going to lose millions over this being brought to light, unless issue fixed soon,

I verified the behavior with a brand new 2C cam yesterday. Jumped around in front of it after setup to create some events. I viewed the 3 events created and confirmed they were viewable and then pushed the sync button on the camera for 10 seconds or so. I went back into Events and every event for the 2C that I created was gone, as was the camera from the app.

I added the camera back into the app without any issues, but the events were still gone.

This is certainly a flaw that should be fixed quickly. Since most of my cameras need a ladder to access, its not going to force me to change vendors immediately, but Eufy should at least add a confirmation dialog or some logic to prevent the camera from being deleted this way. I can understand why they can’t prevent events from being deleted when the camera is deleted, but stopping the camera deletion from happening without using the app should certainly be possible.

All control should surely be from the app or web interface (if they ever get that sorted) never from the camera itself which anyone can access. I don’t understand why this would even be possible.

Wow. I just bought a 2k doorbell and 2c pro cameras tonight to accompany my indoor cams. Only to read this. Have Anker or @Mengdi responded to the previous threads on this topic?

@rhy33 @preset I just find it very odd that @Tank would archive the thread instead of addressing the concern?!?

This is a MAJOR problem that has been brought up by myself and others without anyone from Eufy acknowledging or rectifying this flaw through a software update. It almost seems like they want it to go “away” and not get brought up time and time again on these threads. I guess that didn’t work, LOL!!!

@Sobrevilla @Raj_Parmar @preset So I emailed Eufy about this issue as I’m still within the 30 day cooling off period and advised them I would be returning the product unless they were able to confirm if this issue would be addressed before that period ran out. This was the response… 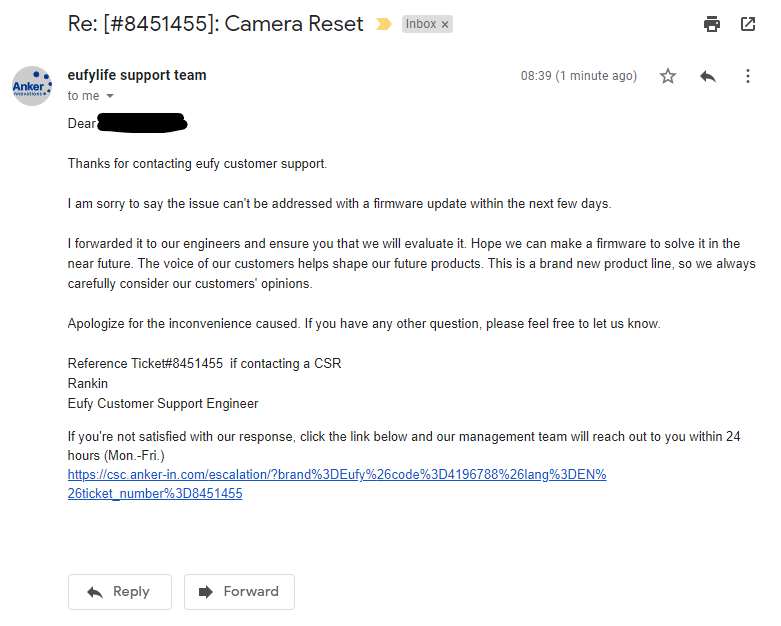 ‘…the near future’ sounds particularly vague and will take me beyond the cooling off period, so it looks like I’m going to be sending mine back.

Does anyone know if this affects all the Eufycam cameras? Mine is the 2C Pro.

I tested a 2c today that had the problem. I’ll check my other cams tomorrow and post a list of the ones I find.

@rhy33 Thank you for “officially” bringing it to Eufy’s attention and posting their response. Several of their cameras have been on the market for over a year. This is not exactly a “brand new” product line. It should have been realized and fixed by now. If they missed this major issue, then what else have they missed in regards to security. I’m very disappointed in their response and efforts to this problem. But I’ve had their products for a while now and have emailed customer support several times…and am not surprised by their generic response.

I can verify the Cam2 Pro has this problem as well. Instead of a quality product, their cameras are just more of a toy/gimmick. All because they have yet to address this issue through a software update. However, I’m glad they are continuing a “new” product line with an updated Homebase 3 and Floodlight. Maybe they should focus on this major security flaw FIRST

Sound like it will arrive with Homebase 2 support on the indoor cams and IFTTT integration.

It’s a real shame that there has been no statement or clarification from Eufy directly on the forum.

It is very suspicious behavior on the part of Eufy. Tank owes the community an explanation.

As I’ve checked with the Security Team,

The product is designed to be like this: If you press SYNC button for 10s, the camera will automatically delete all the settings and data and restore factory setting.

So no need to worry about leaking data to others:)

@Mengdi Think about that response. Does that make any sense?!? If someone steals my camera they shouldn’t have access to my data to begin with because it’s all stored on my “secure”homebase. It almost makes it seem that if this “reset” feature was not added an individual would have access to my videos…

So in essence the “Security Team” is acknowledging this horrible design feature which doesn’t sound like it will be “updated” or changed in future updates. Why is this not promoted or discussed in anyway? This is not a security camera then, because if someone knows what they’re doing…in 10 seconds all you videos on a camera can be erased.

Does Eufy staff even use their own products in a real environment??

If Eufy isn’t going to acknowledge this is a problem and fix it quickly, you can be sure that this flaw will be widely communicated here, on Reddit, and the major retailers sites. That certainly won’t be good for business.

@Mengdi Firstly, why would you even need this as an option? Who needs to delete everything from the Homebase by using the camera? There’s a reset button on the Homebase itself so this ‘design feature’ is superfluous.

Secondly, and WAAAAAYYYY more importantly, as @preset points out, a thief can steal everything from my house and as long as he remembers to hold the camera SYNC button for 10 seconds then I’ll have no evidence of him doing it. Are you serious that this was an intentional design element?? If this was an oversight then just acknowledge it and release firmware preventing it from happening without confirmation from the app. How hard can that possibly be?

This statement just beggars belief. ‘No need to worry about leaking data to to others…’ - Yeah cause that’s the major concern here. FFS. My Eufycam has been returned and I won’t be in a hurry to purchase Eufy products again based on this experience. Such a shame because there are so many good points, but unfortunately, I only needed it to perform one basic function which it cannot do.

I’ve just finished charging my new 2k doorbell and 2C pro cameras. Now I’ll have to consider if these need to be returned, along with my indoor cams.

I’m curious, why isn’t this advertised as a “feature” more widely on Amazon, your own website or Kickstarter fund-raising? Is it because there is just no logic to this? It is a fundmental flaw, which actually helps evade the storage of questionable conduct?

What was the thought process?

Furthermore, can you actually describe one instance where this is a useful feature?

@Mengdi are we just ignoring this and hoping it goes away??

I see you’ve been active on other posts, but there hasn’t even been an acknowledgement of this issue, let alone a proposed solution. Why are you so reluctant to admit the mistake and commit to rectifying it?

I did some testing on my devices and found that all my cameras have the same issue with the 10 second sync button blowing away the device and erasing the data. My Pan and Tilt also had the same issue and all data was erased from the SD Card. Strangely, my indoor 2k cam was removed, but when I re-added it, the SD card videos were intact. I tested Cam E, 2C, ,2, & 2C Pro plus my indoor cams.

Also, entry sensors can be disabled in the same way. Pushing the sync button will incapacitate the sensor in the last mode it was in and it will appear normal, but the underlying data is all reset to factory defaults. Changing state doesn’t show in the app.

Keypads also have issues. Here, some info like access codes was retained, but basically the keypad is a brick. It won’t accept codes or change modes, but appears normal other than that.

I sent a note to support detailing the testing I did and expressing my displeasure at their response to this issue. Hopefully that will light a fire under them. If not, I’m prepared to send some of the gear back that I have had less than 30 days.

I am hesitant to spread this information around too far in the hope they get their act together and fix it, but if they don’t respond I’ll be posting the info other places and on Amazon reviews.

I just bought some eufycams ans wanted to buy some sensors and maybe the keypad but with this flaw that i am just discovering, i want to send back all these useless SCAM!
If a thief can reset my cameras and delete all the footages of him steeling my house, i don’t want to keep these and I will post comments on every single one product of eufy on Amazon, Aliexpress ans other websites, letting everyone know of this flaw before buying a eufy product. I suggest that every do the same so that Anker don’t ignore this…

I give Anker 14 days to fix this via a firmware update of the homebase (they just have to not allow a desync of a paired device, come on, it’s not so difficult). 14 DAYS @Mengdi !

Thank you for letting us know about this @rhy33 . They can delete our posts here but not on Amazon or Aliexpress !

I just did the test myself.

It really took off the record from the app when you press the sync button of your camera for 10 seconds.

But i am wondering if the record don’t stay in the homebase memory because when i synced back my camera, the videos reappeared !

So this can mean 2 things :

Can Anker tell us which one is it?
Because if it is the first, it is even worse ! The thief steal your house, steal your security cam, erase your footage and can see all the records from the past !!

If it is the second, maybe it is not as worse but that would mean that we need Anker to access our footage to decode it with the serial number (or another thing).

Thank you for your answers Anker and to fix this issue.