Is Eufy and Arlo the same

So after seeing the new white doorbell I noticed it looked just like Arlos doorbell. Also I had dropped by Arlos community and the problems they have seem to be the same as Eufys. It’s just interesting to me. Activity zones do not work for them either. It seems the technology is the same and neither know how to fix their own stuff.

probably the same technology but I hope Arlos doesn’t have the same terrible customer service.

Actually Arlo hasn’t been part of Netgear for some time.

I have both and there are certainly differences. If Eufy was the same company there would be a push to remove any non subscription options.

As far as customer service arlo is pretty bad as well.

Some problems will appear with both of them simply because of limitations of the methodology. The best example i can think of is the issue i have seen here repeatedly about not picking up motion until a few seconds have passed and missing most of the action. That is largely a problem with being battery powered and using PIR and needing enough motion to trigger the camera to wake up. Arlo has been having tose reports for years. There solution on the their pro cameras was simply to plug it in and enable always on recording functionality.

Like I said it was interesting that the issues appear to be very similar. The bad thing is my 2 choices when figuring out what to buy were these 2. I should have hit their forums instead of believing reviews. I’m always pretty skeptical about reviews, but here I am.

Its worse actually. They are working on eliminating there 7 day cloud storage options and forcing all users to pay for subscriptions.

Netgear actually purchased a company called VueZone back in 2012 which actually became Arlo. Arlo was then spun off into a separate company.

Their technologies are very similar and even using the apps are striking the same in places.

A company needs to make money to survive and you can’t expect that on just hardware.

Where do you think Eufy is making their money? Probably selling your interactions with the system. Yes, recordings are “stored locally”, but then how come you need to have a connection to their servers to actually view previous recordings? Also, Eufy has their own cloud service for storing recordings. Who is to say they won’t ever start to move that direction?

Another thing, with the newer Arlo hubs, you do have the option to store your recordings on a USB drive without a subscription. I know Eufy is working on external local storage as well, but wondering how it will be implemented. Will you need to use the Eufy app to view the external recordings? Right now I can just pull the USB drive from my Arlo hub and get direct access to the files.

Yes them selling our info was a point that was expected. Everyone does it. One thing though there is not even fine print for half of the other crap they are doing.

So after seeing the new white doorbell I noticed

Where did you see a white doorbell?

I know Eufy is working on external local storage as well, but wondering how it will be implemented. Will you need to use the Eufy app to view the external recordings?

I think this is going to happen soon, but wait and see if we can access the videos directly or through eufy security app. 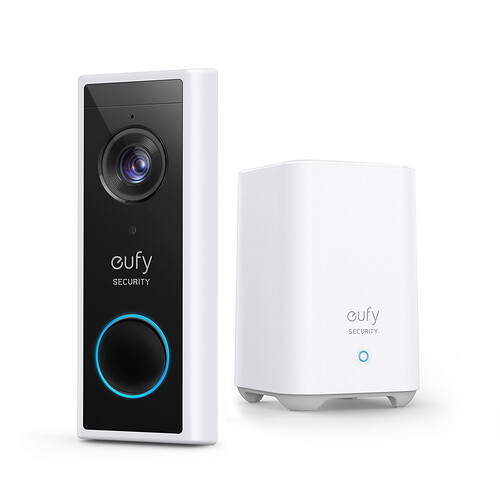 That isn’t true as i did it for some time. You don’t need a subscription to view recordings stored on local storage, or to activate local storage.

Somehow I missed it completely

Thanks @Haadsecure @adammiarka
Not completely white but a cover, I don’t think I will buy that. I’m good with black alone.

You can do this now with RSTP and a few simple apps. I have two instances of motioneye recording from two indoor cameras. One goes to my home server and the other to a raspberry pi